Why is a Mac computer user friendly?

Why is it also basic looking, just keys and a screen?

I can tell you that the goal for Apple, was to remove complexity for the end user. They always aim to remove the feeling of frustration for the general user and make it simple. I was personally computer illiterate, and still am to an extent, but the Mac never overwhelmed me, and I have learnt to understand computers better through the Mac.

Below the surface of any computer is a jungle of wires, chips etc. etc. There are a multitude of programs designed to allow for all sorts of amazing features as well, but to the user it is not apparent. It may appear cool and trendy to present so much detail, showcase the implicit material and appear advanced, and expert. However, the majority of people would be overwhelmed, not welcome; intimidated and afraid that they would not enjoy the experience of such chaos. And this is how it appears to the general public, messy.

A Mac is a very streamlined, clean, but elegant machine. It is inviting and friendly, but that does not mean it provides less return. A Mac is as detailed as any computer, it has many features, it handles well, provides quality and excellence in many ways. Most computers these days have also followed the same trend as Apple started many years back.

Let’s imagine this in the context of the game of football. There are 95% of players playing park football, whilst only 5% play in representative environments. I know from client feedback and concerns, that the average child does not feel comfortable in an environment that is too advanced, that is beyond their current level. They require time to build into it, as I did with computers. So, the majority are just not welcome to the world of elite football, and therefore they are discounted without a chance.

At Justfootball Academy we continue to add detail, information, excellence and features. However, it is always worked in, without affecting the external picture. The child must always feel that sense of freedom, joy, positivity and the magic of the game. It is our job to make the learning happen through design, through coach guidance and through culture. The work must be underlying, the learning experiential.

Give young players the roots to grow and wings to fly

This quote was used by Belgium FA Chief Coach Educator Kris Van Der Haegan as he explained how a move away from a team-centred to player-centred coaching inspired the Red Devils run to the 2018 World Cup semi-final.

Where team-centred coaches are only concerned with winning, meant late maturers were being overlooked. The individual approach when done correctly should remove some structure: “If you tell players not to dribble, they won’t dribble.”

Allow space for players to make decisions, to make mistakes, to learn and flourish. 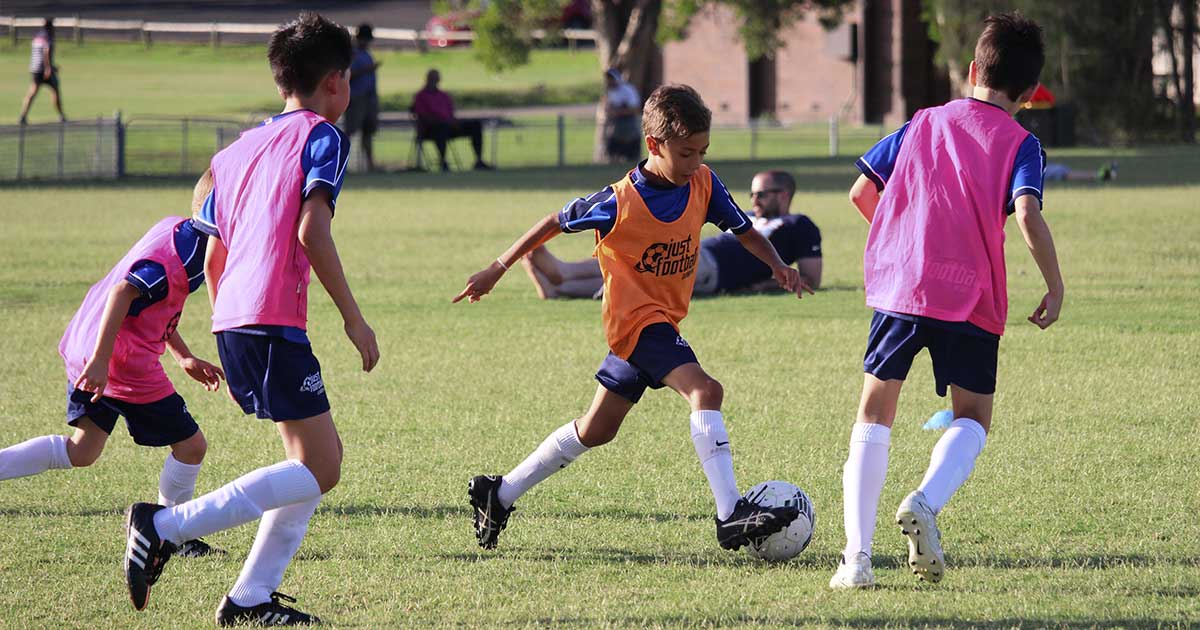 Going back to the streets to learn creativity

The Germans admit that the English are producing better players than Germany, with a strong focus now being placed on developing strong individuals. The English U17 World Champions squad consisted of two players that are currently playing in the Bundesliga, Jadon Sancho who is a star player at Borussia Dortmund, and Emile Smith Rowe who is at RB Leipzig. Callum Hudson-Odoi of Chelsea has also been touted by Bayern Munich. The team also fielded the likes of Phil Foden from Manchester City, Morgan Gibbs-White of Wolverhampton Wolves and Rhian Brewster of Liverpool, to name a few.

The Germans recently held a DFB event titled ‘Back to the Top of the World’ where it was noted that German players lack on-pitch problem solving skills, which players like Sancho display. Germany will emphasise small-sided games and the spirit of the streets as they attempt to reverse the recent decline of their national teams. See full article here https://trainingground.guru/articles/germany-focus-on-fun-and-joy-to-reverse-decline

Bierhoff said Germany was not producing enough flair players because training had become too formalised. “We need room for individualists, we need more football pitch mentality,” he said. “It needs more feeling again. Through freer training, street football should be brought into the clubs. We need to create more space for creativity and enjoyment for our players.” Freer meaning a balance between controlled and free training environments. Jadon Sancho learnt to play in a park behind his estate in Kennington, south London, and describes himself as a street footballer.

Joti Chatzialexiou, Director of sports at the DFB said Germany had to” bring back more fun and joy” to youth development and that small-sided games were a key part of this.

In this regard, Germany have taken particular inspiration from near neighbours Belgium, with whom they are in regular contact.

Kris Van Der Haegan said: “Kids want to play football in their own way, not the way adults want to play,” he said. “If you put a child on an adult’s bicycle, they’ll say, ‘are you crazy?’ But this is what happens in football, we ask them to play 11v11 or 8v8 at a very young age. They are not able to do it.” See full article here: https://trainingground.guru/articles/coaching-revolution-that-took-belgium-to-top-of-world

Chatzialexiou admitted: “We’re already letting our youngest play 7v7 in games, which is not age-appropriate because they have too little ball action and too few decisions to make.

Dave Parnaby who was academy director at Middlesbrough for 20 years, also says that training had become too formalised, and that the art of play has been lost.

When Parnaby refers to former North-east – and England – playmakers such as Bobby Charlton, Colin Bell, Bryan Robson and Paul Gascoigne, a key word is “imagination”. When he speaks of modern youth football, Parnaby dwells on “formalised”. This is no ‘things-were-better-in-my-day’ critique, it is an experienced coach reflecting on change. “I’m not saying it’s better or worse,” he says, “I’m just saying that’s how society has gone.”

“A good word is formalised; you’ve got quite big clubs with lots of children affiliated. There’s lots and lots of provision for formalised football, where there are lots of people in tracksuits who call themselves coaches. “Lots of cones, high-class equipment, and we’ve been lucky at Middlesbrough that we have had access to that. Society has moved and it’s taken street football away, that element of play. At Middlesbrough we’ve consciously tried to take that formalised football and make it play. “In terms of youth development Man United have done that best, made it playful, not too much influence from people called adults.” Einstein himself said “Play is the highest form of research”

Justfootball agrees with the world leaders

If the youth development at the highest level, in the leading countries are reverting to street football, then why is Australia still persisting with formalised training? Why are training environments driven by team systems, passing practices and stagnant exercises?

Going back to my original analogy, how can we provide our expertise in coaching without disrupting the game too much? We like to think that Justfootball Academy is a playground for footballers to learn the game. It is ‘Structured street football’, and it is specifically designed for each player level, and age relevant.

I strongly advise you to read all the linked articles, they really do provide a great insight to the methods that are predominant in leading football nations of the world. 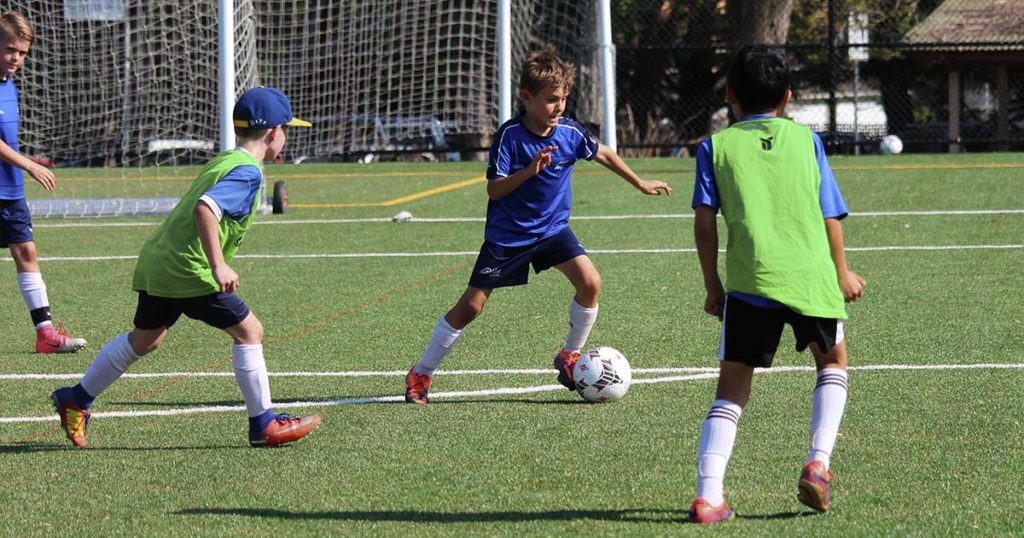 previous
The Purpose and Intent of Dribbling